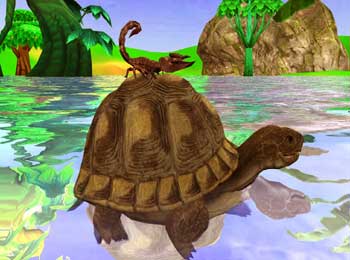 Old man saw that, after scorpion sat on tortoise back, it started swimming toward other side of the river.

Seeing this, old man got curious and decided to follow that tortoise. He jumped into the river and started swimming after it.

Tortoise stopped at other side of river and there scorpion jumped off his back, on the bank of river and started walking.


Old man started following that scorpion. Going ahead, he saw that on way toward which scorpion was going, a devotee was sitting with his eyes closed, worshiping God.

Old man thought, “If this scorpion try to bite that devotee, that i will kill him with my stick.” Thinking this, old man kept following scorpion.

As old man moved forward, he saw that a black poisonous snake from other side was moving toward that devotee.

Old man surprised to see what happened next..

He saw that before snake could bite devotee, scorpion stung that snake, due to which snake fell unconscious right there. After this scorpion left from there.

After a while, when devotee opened his eyes and got up. He was surprised to see that unconscious snake.

Old man who was still there, told that devotee.. how God brought that tortoise to bank of river and then how scorpion came here and protected him from snake.

Listening to this, tears came out of devotee eyes. he closed his eyes to Thank God for his Kindness and always keeping him safe from danger.

You May Also Like: Questions about God – Saint and Disciple Story