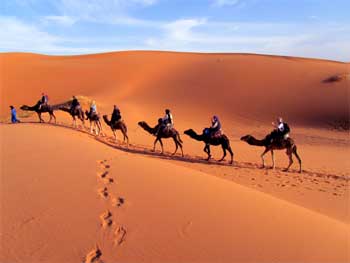 Long time ago, An old man lived with his three sons in a deserted village. In his all life he earned 17 camels. His business was to rent camels for shipping in desert. One day he passed away leaving his will and assets to all his three sons.

After funeral, Sons read the will. As stated in his will he divided all the properties in to three equal parts but he divided 17 camels in different way. It wasn’t shared equally as 17 is odd number. He stated that the eldest son will own half of the 17, middle one will get one third and third son will get one ninth of 17 camels.

All the sons were confused to read and couldn’t divide 17 camels according to the will. Several days went but still they couldn’t find the answer. Finally the took the issue to the village head. Wise man heard the problem and instantly found the solution. He asked them to bring camels to him.

Now, Wise man added a camel owned by himself to other 17 and made total count of 18.


He started reading will and according to the will first son gets half of camels, which now counts to 18 / 2 – 9 camels! The eldest one got 9 camels as his share.

The wise man asked the second son to read the will – he was assigned a share of 1 / 3 of the total camels.

In end, camel bought by wise man was taken back and problem was smartly solved.

Moral:
Intelligence is nothing but finding a common ground to solve an issue. Every problem has a solution.