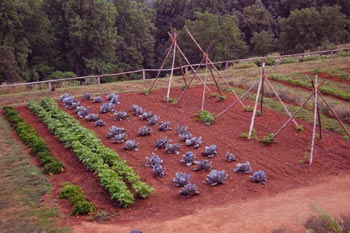 Once an old man used to live with his son. But one day his son was convicted and sent in prison.

Old man had a plot in front of his house in which he used to grow potatoes. This year again it was time for planting of potatoes in plot but all the digging and planting was lots of hard work for old man to do all by himself.

His only son was still in prison as old man was not able to get any attorney to get him out of prison. So one day old man wrote a letter to his son in prison and told him about situation.

He wrote in letter:


Son,
I am feeling bad as this year i will not be able to plant potatoes in garden. I don’t want to miss this as your mother always loved this but son am too old to dig up plot for gardening of potatoes.

I wish you were here with me, i know you would have dug the plot for me and all my troubles would be over.
Love Dad.

After just few days old man received a telegram from his son with short reply from his son:

Note in the Telegram was:

Next morning, old man saw that FBI agents and police offices showed up in front of old man’s house and dug up whole plot in search of guns but weren’t able to find any gun so they left.

Confused by all this old man wrote another letter to his son in prison, telling him about all what happened.

His son reply was:

Dad, Go ahead and plant your potatoes.. It’s best i could do to help you from here..

If you have decided to do some thing Deep from your Heart, you Will find way to do it.

3 thoughts on “Old Man and His Son Story”