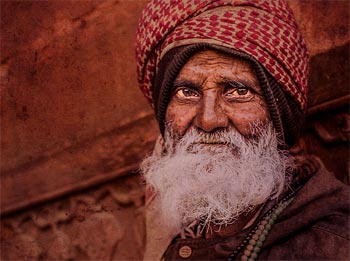 Once a wise old man who lived in Himalaya used to visits local villages once a while.

During his visits to local villages he used to meet villagers and entertain them and sometimes amuse them with his abilities. His ability was to tell anyone about the contents they hold in their pocket without looking at them or tell them what they were thinking.

Villagers would visit him regarding their problems and find solutions. Every one in the village knew about wise old man talent and trusted him.

Their lived a boy who decided to play a joke on old man, so that he can discredit his abilities in front of villagers and prove him to be a fake.


Boy knew that old man would be able to answer what object he was holding in his hand. So, Boy came up with an idea to trick old man. His idea was to hold that bird in his hands behind his back and ask old man.

He decided that once old man rightly state the object he was holding, he would ask old man if the bird was alive or dead.. If old man would say bird is alive then young man will crush birds neck and show him the dead bird and this would prove him wrong.. If old man replied bird is dead then he would leave the bird to fly away. This way he can prove he old man wrong and fraud.

Following week when old man came to village, boy quickly caught a bird and hold it in his hands behind it’s back so that old man can’t see it.

He walked up to old man and said, “Can you tell what’s in my hand??”

Young man again questioned, “is it dead or alive?”

Old man replied, “It is as you choose for it..”

After listening to old man reply young man realized that it’s not his ability but also wisdom of old man because of which everyone in village trusted him. He apologized for his arrogance and left.

Moral:
Similar is with our life.. It’s our choice.