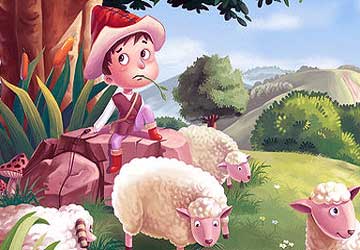 Once in a village lived a boy with his father. One day father told his son that he is grown old enough to look after sheep all by himself.

So from that day onward, everyday boy would take sheep to grass field and watch over them as they spread all over field grazing grass.

Just after few days boy started to feel really bored by just watching them. He wanted to have fun and play so he decided to play prank.


Listening to his scream all people around came running with tools in their hand to chase wolf away and help boy to save his sheep.

But once they reached there running breathless, they become angry when to know that there was no wolf and left muttering about boy who wasted their time and giving them a good fright.

While villagers were leaving, boy was laughing at them and was having fun to see their reaction.

Listening to this again all people working around came running with tools to chase away wolf. This time also boy made a false alarm and was laughing at the fright he caused. Villagers left angry.

This time no one came to rescue as everyone thought that boy was trying to fool them again. Boy lost all his sheep.

Moral:
Never lie or Make stories up for Attention, For no one will Help you When you Actually Need it.