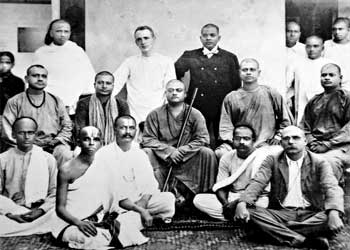 Once Ramakrishna asked his disciples to steal a little rice from their own home but there was one condition that nobody sees them stealing rice.

After a week all of his disciples came back with rice except for one. Everyone was happy as they were able to complete task given to them of stealing rice from home without anyone noticing them.

Student told him that even if he tries hard to steal rice hiding from everyone else, he always saw himself stealing rice.


So there was never ever a situation when he could have steal rice when nobody is seeing..

Because what ever we do, it is never hidden from one person and that is our-self.

That student who came empty handed was Swami Vivekananda.

Moral:
Whenever we try to do Something Wrong, even if we hide it from Everyone Else yet we can’t Hide it from our-self. So we should Never do anything Wrong.

Once while in school, recess time Narendra (Swami Vivekananda) was talking to his friends and everyone was listening to him so attentively that they were not aware of what’s happening around them.

Meanwhile recess ended and teacher entered class and started teaching his subject to class. After sometime teacher heard some whispering and noticed that students were talking sitting behind.

Teacher was annoyed by it and started asking students about what he had been teaching in the class but no one in class could answer him. When teacher asked Narendra same question. Narendra answered each question correctly.

Teacher inquired about who was the one student talking to others and kept them involved in talks even during class.

Everyone in class pointed toward Narendranath but teacher refused to believe as he was only one who answered everything correctly. Teacher thought everyone was lying.

So he punished whole class and asked them to stand on bench as punishment except for Narendra. Yet Narendra joined his friend and stood up on the bench with other students.

Teacher asked him to come down and sit on his seat but Narendra replied, “No Sir.. I must also stand up as i was the one who was talking to them..”