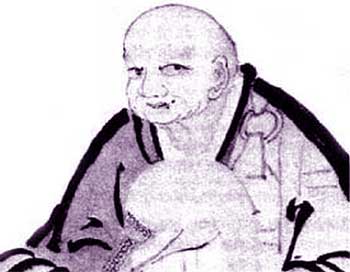 Once Zen master Hakuin lived on outskirts of a village in Japan. He was very famous and has great reputation. Whole village respected him. Whenever he would go to village for alms, people would greet and welcome him and would give him many things.

But one day everything changed.

A young unmarried girl in village became pregnant and gave birth to child. When her family asked about child’s father. She said that it was Hakuin’s child.

Girl’s father raged. He gathered people in town and walked to Hakuin’s place. It didn’t take long for people to change. Those people who once respected him, now attacked Hakuin’s hut and started abusing him.


They set Hakuin’s hut on fire.

People shouted, “This child is yours.! Take him with you.”

Hakuin said, “Is it so? Is this child mine?”

Later he went to beg at his usual time with child but today every door he stood in front of, was slammed shut. While he walked by village roads, crowd of people started teasing him, abusing him and threw stones at him.

Hakuin reached house of girl whose child it was.

He said, “Don’t give food for me but at least give some milk for this child. I may be at fault but what’s fault of this child?”

Child was crying, listening to child crying, became unbearable for girl and she fell at feet of her father and said, “Forgive me i lied. I gave name of Hakuin because i wanted to save real father of child. So i thought to using Hakuin’s name.”

Father realized what great mistake he did. he ran out of house and fell at feet of Hakuin and tried to take baby.

Girl’s father said, “Forgive me. There has been mistake. This child is not yours.”

Hakuin replied, “Is this so? Is the child not mine?”

Hakuin gave child to Girls father and started to leave.

Just then people from crowd said, “You are mad!! Why didn’t you deny it this morning?”

People said, “Child wasn’t your yet everyone condemned you, insulted you, humiliated you. Still you didn’t said anything. Why?”

Hakuin replied, “If I had been concerned with your condemnation, I would have been concerned about your respect also. I do as I feel right, you do whatever you feel to be right.

People said, “Your good reputation was lost. Everyone thought you were bad person.”