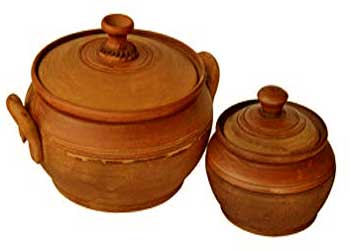 When neighbor received pot, he felt that it was heavier than usual. So he looked inside and saw that there was another small pot inside that pot and asked, “What’s this??”

Neighbor was greedy and was happy to get more. So he didn’t asked anymore and kept that small pot with himself.

Some days later Nasrudin again borrowed big pot for a day. Neighbor happily gave that pot to him.

Week passed by but Nasrudin didn’t returned the pot. Neighbor went to him and asked him to return that pot.

Nasrudin with sad face replied, “I can’t return you that pot..”

Neighbor questioned, “But why??”

Nasrudin replied, “I hate to be the bearer of bad news…but your pot has died.”

Neighbor got angry and said, “What? What are you saying..? A pot can’t die..”

“Well, when i came to you with it’s child.. you believed. Then why can’t you believe it died..?”, said Nasrudin.

Neighbor realized his mistake and couldn’t say anything more.

Once a man knocked at Nasrudin’s door at night and said, “I need a shelter for night.. Can you help me?? I am God’s nephew..”

Nasrudin smiled and replied, “Well then.. for someone special like you, i must offer only most exalted place to spend night..”

Saying this Nasrudin stepped out of his house and said, “Follow me..!!”

Man curiously followed him. After a while, they reached a local mosque.. Nasrudin stopped there.

Then he turned toward man and said, “And what better place could I offer you to stay the night than here at your own uncle’s house..!!” and left..

One thought on “Nasrudin Stories – Tricksters got Tricked..!!”