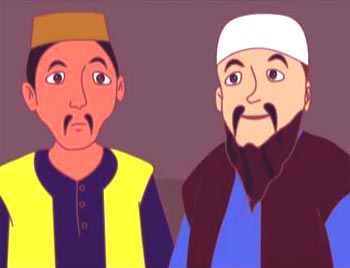 Once Nasrudin was in a rush and quickly went to Mosque for evening prayer and prayed in a hurry and was gonna leave. As he was gonna leave one of the religious leader stopped him.

Religious leader said, “This is not right way to offer prayer to God. You should start over again and pray properly.”

So Nasrudin went back again inside and prayed again. When he finished and came back.


Religious leader said, “Now, tell me.. Don’t you think that God would appreciate your second prayer more than that which you did in hurry.”

Nasrudin replied, “Not really..!! Although my first prayer i did in hurry but that was done for God but second prayer that you made me do was done for you..”

Once Nasrudin went to a bath house. He was dressed in bit worn out and torn clothes.

When Bath attendant saw his torn clothes, he took him to be a poor man so didn’t pay much attention to him and didn’t gave him much care. Bath attendant services was really bad.

Next week again Nasrudin went to same bath house. This time when attendant saw Nasrudin, he treated with much care and attention and gave him royal treatment.

Attendant was hoping for getting big tip even this time but Nasrudin flunked a mere dime his way and also gave him nasty look.

Attendant stood there in disappointed look on his face. Seeing this Nasrudin turned toward him and said, “Today’s tip was for the services you gave me last time and the tip which i gave you last time was for today’s services..”