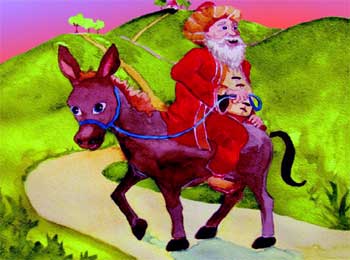 Once in a village, Village Head liked poetry and sometimes used to write on his own. One day while Village Head and Nasrudin were sitting at a shop, he read one of his poems to Nasrudin.


Head got angry and sentenced Nasrudin to be put in jail for three days. After getting released from jail again Nasrudin happen to be at same shop where head of village was sitting.

Village Head had wrote another poem and read it to Nasrudin. When he finished reading, he asked Nasrudin, “What do you think of this one??”

Nasrudin didn’t reply. He got up from seat started walking away. Village Head stopped him and questioned, “Where do you think you are going without answering??”

Once at a barber shop Village Head was getting his beard trim. After barber finished trimming he remarked, “Sir, your beard is starting to get grey..”

Village head got angry and ordered to put him to jail for three days.

Then Village head turned to an attendant present there and asked him, “Do you see grey in my beard..?”

Attendant was little scared and replied, “Almost none..”

Village head got furious and yelled, “What do you mean by almost..!!”

Then he order his guards to take him and jail him for a week.

Now village head turned to another attendant present there and asked same question. Attendant had already seen result of previous replies and was scared to reaction of Village head. So he thought for a while and replied, “Sir.. Your beard is exquisite.. it’s completely black..”

Village head shouted, “You liar..!! Guards give this man ten lashes on his back and then jail for a month..”

Finally, he turned to Nasrudin who was present there and questioned, “You tell me.. What is color of my beard??”

Nasrudin replied, “Sir..!! I would love to answer but i am color blind…”