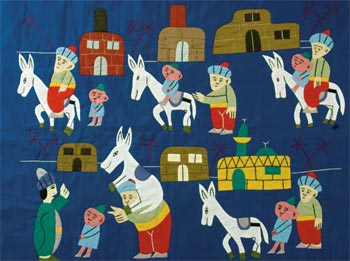 Once Nasrudin and his son set out to market with their donkey walking beside them. On their way they passed by a bunch of people.

Nasrudin heard some of them commenting, “Man has donkey which his son could ride easily and yet he is making his son walk all the way to market..”

Hearing this Nasrudin picked up his son and seated him on the back of donkey. After this they continued their walk for a while until they passed by a group of people sitting outside as shop drinking tea.

One to them commented, “What times have come..!! Young man is riding on donkey while his old father have to walk. Doesn’t he have any respect for his elders??”

After this they continued their journey like this for a while until Nasrudin heard someone commenting, “Look at this man who is so mean as to make his little kid walk and he himself is riding on donkey. How shameless..”

Right then Nasrudin picked up his child and seated him in front of him on donkey’s back and continued their journey.

They passed by another group of people where Nasrudin heard some people saying, “How cruel are these father and son to overload a donkey like that. They have no mercy on poor animal”

On their way to market everyone was laughing at them seeing Nasrudin carrying donkey in his back.

Seeing everyone laughing Nasrudin put donkey down and continued their walk to market place as they started in the beginning, all three walking down toward market.

Moral:
People will find Faults in anything you do. It is clearly not possible to Please all people. It is better to do what you know is right and please God.”