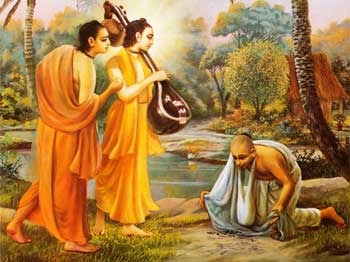 Once Narada  was going to Vaikuntha to see God Vishnu. While leaving from earth, on his way he saw an old Sanyasi sitting under a tree.

He went to him and said, “I am going to meet God. Is there any message you would like to give to me?”

Sanyasi replied, “When you meet him, please ask him how much longer shall i wait? I have been Sanyasi, the last three birth. When will i be able to attain liberation from his world?”

Narada said he would surely give message to God.


Then Narada went a little further and found another Sanyasi under a tree, his eyes were closed and lost in his own world, playing instrument and singing hymns.

Narada went to him and said, “I am going to God’s abode, do you have any message for him?”

Sanyasi kept singing. Narada shook him by shoulder and asked him again.

He answered, “No, I have nothing to ask. His grace is boundless, whatever my wants are, he has already provided. Don’t trouble him on my account. You don’t even need to mention my name because i could have wished for and more. If possible just convey my gratitude.”

Narada left. He went to Vaikuntha and returned.

Upon return. First he went to old Sanyasi and said, “I conveyed your message and Vishnu said – It would take as many births to attain liberation from this world as there are number of leaves on this tree.”

Listening to this Old Sanyasi was filled with rage and tore his books and threw away mala and shouted in anger, “What injustice..! For three births i have done penance and tortured myself still so many births. It cannot be..!”

After this Narada visited another Sanyasi, who was sitting under another tree still singing hymns and said, “You didn’t requested it but still i asked God on your behalf, how long it will be before you attain liberation and he said it would take as many births as there are leaves on this tree, under which you sit.”

Listening to this Sanyasi jumped with joy and started dancing with glee and said, “So soon..! How high has he rated my worth.. Look around! There are so many leaves.. Look at other trees covered by leaves but he has counted only leaves of this tree for me.

Only this many births!! How wonderful. How will i bear his grace? How will i express my gratitude to him?”

He was mad with joy and danced around. He couldn’t contain his joy. Just in that moment he attained liberation and his body fell, what was to happen after infinite years, happened immediately.

For him who had such patience, attainment doesn’t take a moment longer to come.

You May Also Like: Benefit’s of Chanting God’ Name..!