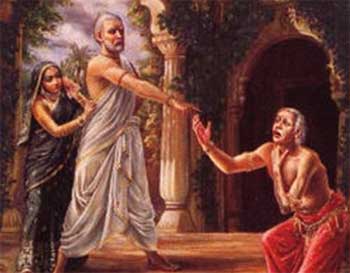 King Yayati was one of ancestors of Pandavas. He was well conversant with scriptures and had intense devotion towards God.

He was utterly unacquainted with defeat. Nevertheless, cruel was his fate.

He cheated his wife which angered his father-in-law Sukracharaya, who pronounced a curse on him. He cursed him with premature old age.


In vain, King Yayati cried for forgiveness. When Sukracharya calmed down a little, he said, “King, i am lessening the strength of my curse. If any human being agrees to exchange the beauty and glory of his youth with you, with your body’s deplorable state then you will get back the prime of your own youth.”

He went to his sons, tempted them with throne and his kingdom and tried to persuade then in every possible way to exchange their youth with him.

However, youngest one, most devoted son, Puru, gladly accepted his father old age and gave his youth and beauty to him in exchange.

Yayati was at once transformed into prime of his youth.

In no time, desires entered into his body and he started to enjoy life. He fell desperately in love with a Apsara (nymph) and spent many years with her but still his insatiable desire couldn’t be quenched by self-indulgence.

At long last, he realized truth of life. The King Yayati realized the true knowledge that lust, desires and sex cannot satisfy a man even if he enjoys it for thousands of years.

He went to his youngest son Puru and said, “Son, impossible to quench is sensual desire. It can never be quenched by indulgence any more than fire is extinguished by pouring ghee into it. To you I return your youth. To you I give my kingdom as promised. Rule the kingdom devotedly and wisely.”

Immediatly, Yayati entered again into his old body and Puru regained his youth.

Puru ruled the kingdom, where as Yayati spent rest of his life in forest practicing austerities and in due course, he breathed his last breath there.

The soul-bird flew back to its abode of delight.