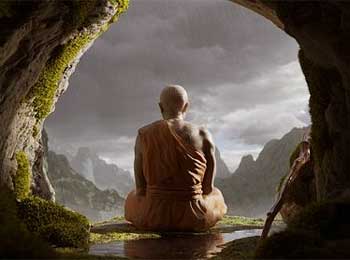 Long time ago, there were two Monks who used to live in two neighboring caves. Both monks spent most of their time in deep meditation. Sometimes, people from surrounding village come to monk for advice.

People felt peaceful and happy when Monks were around.

Some people who came to visit monks noticed that, in one cave it was dark but from other cave, occasionally, a strange golden light was illuminating which was not strong but still noticeable.

One day a great and famous Sage arrived in near by village. A villager came to him and said, “There is a mystery that only you can solve..”

Villager began to tell, “Here on hill, there are two caves and there live two monks.. both are great but still there is golden light illuminating from one cave but other one stays dark.. Why so? Does monk living in cave with illuminating light is more advanced than other? Does he really have supernatural power?”

Sage explained, “Sometimes, when one works intensely on the spiritual path and concentrates a lot, various phenomena may happen around him such as lights, sounds or visions. This is not supernatural.

The mind has a creative force and when concentrated can cause various phenomena even unconsciously.

It doesn’t mean that one is more advanced than the other. Not all brains produce these things. Some do and some don’t. It depends on their mental sensitivity.

So it is also with those who see them. Not everyone sees this light. In any case, it has nothing to do with whether one monk is more advanced or less advanced than the other.”

You May Also Like: Monk Alms-pot Story – How to Pacify Human Desire

Search Keywords: Mystery of Light – Villager Question to Sage, Stories about Power of Mind, Story about Understanding that Every Person is Different in Perceiving Things, Two Monks Living in Cave Spiritual Story