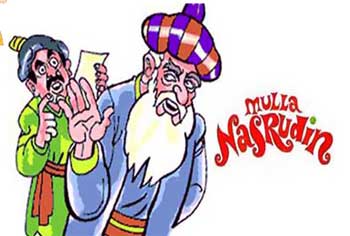 Once Nasruddin went to a formal reception and seated himself on the most elegant chair. Seeing this Chief of guard approached him and said, “Sir, these seats are reserved for Guests of Honor.”

Nasruddin confidently replied, “Oh, i am more than mere guest of Honor.”

Chief questioned, “Oh so you are a diplomat.”


Again Nasruddin replied, “No, Am far more than a diplomat.”

Chief questioned again, “Really?? So are you a minister??”

“OK..! Then you mast be the King himself.”, Said Chief Sarcastically.

Nasruddin smirked and said, “Now you have it.. i am Nobody.” 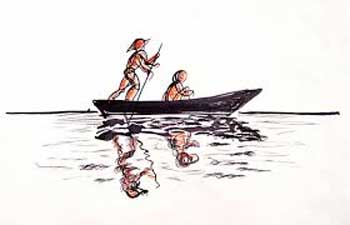 Once Nasreddin took job of a boatman. One day a scholar came to him and asked him to row him across the river. His journey was long and slow so scholar decided to talk to boatman.

Scholar called out, “Boatman.” and then continued, “Let’s start conversation.”

Being a scholar he suggested a topic of his own interest and asked boatman, “Have you ever studied grammar?”

Boatman replied, “No, i have no use to those things.”

Scholar said, “Too bad, You have wasted half you life and you don’t know these rules. It useful to know rules.”

After sometime, boat crashed into the rock in middle of river.

Boatman turned to scholar and said, “Sir, pardon my humble mind, you seem to be wise man, Tell me have you ever learned to swim?”

Scholar replied, “No, I haven’t because i didn’t had time. As i have been immersed myself into thinking and learning.”

“Well in that case. Sir, you have wasted all your life. Alas, Boat is sinking..!!”, replied boatman.

You May Also Like: Mulla Nasrudin and his Neighbor’s Prank