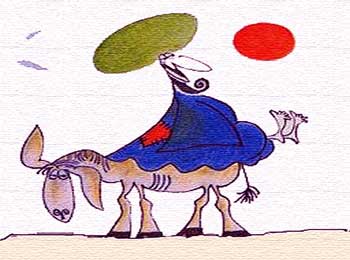 Once Nasrudin and his friend were lying on the green grass beside a country road. It was quiet and restful and peaceful.


Just then Nasrudin said to his friend, “Right now i wouldn’t change places with anybody not even for million dollars..”

“How about five millions?”,asked his friend.

Nasrudin replied, “No, not even for five million dollars..”

After a while his friend said, “Then, how about ten dollar?”

Listening to this Nasrudin sat up and said, “Well.. That’s different story. Now we are talking real money..”

One day a man came to Nasirudin and requested him to write letter for him.

However Nasrudin refused saying, “Sorry, i can’t write letter right now because my foot hurts too much..”

Man got confused and asked, “Your foot?? but what does it have to do with writing a letter?”

Nasirduin explained, “Since, no one can read my handwriting, so i have to go where ever the letter goes so that i can read it to recipient..”

Nasirudin’s village mayor was a very superstitious man and everyone knew about it.

One day Mayor went out for hunt in forest. when he was on a hunt, he saw a glimpse of Nasirudin.

Seeing him, he immediatly shouted to his men, “Mulla’s presence bring back luck on Tuesdays, i don’t want to ruin my hunt.. Go and get him out of my sight..”

Servants followed his request and sent Nasirudin away from that place. Later that day mayor ended up having a successful hunt.

Next day, Mayor saw Nasirudin. He went to him and said, “Sorry about yesterday. It’s just that i thought mulla’s are bad luck on Tuesdays.”

Nasirudin replied, “No.. It’s fine. I am bad luck..!! Because when you saw me you ended up having a great hunt.

Where as i saw you and ended up getting an ass kicking..”