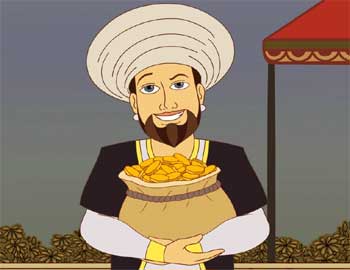 One day, She went to Mulla and started questioning about it, which soon became an argument.

Wife angrily said, “Why can’t you earn a living like normal people?”

Mulla replied, “Dear, i am worker of Almighty God. How can i do another job?”


Wife retorted, “May be then you can ask your God to give you something in return for your service.”

“You are right dear. I hadn’t thought of asking God for anything in return for my service. May be that’s why he doesn’t give me anything.”, answered Mulla.

Wife grumbled, “Oh.. then please go and ask Almighty God for some return for your service.”

Just then, Nasruddin went to garden near his house and sat down on ground and opened his arms, looking towards sky.

There he said loudly, “Oh God, since i am your humble and devoted servant, will you give me a hundred gold coins for my devotion towards you.”

At that time, Mulla’s neighbor was in his balcony and heard this. So, he decided to play a prank on Mulla and threw a bag full of 100 gold coins towards Mulla.

Mulla picked it up and went inside home with that bag. He called his wife and showed her bag and said, “See, i am such good devotee of Almighty that he gave me 100 gold coins.”

Wife happily took out a coin from bag and went to market.

Seeing Mulla wife shopping, their neighbor’s wife, grew suspicious. When Neighbor’s wife reached home, she told her husband about it.

Hearing about it, Neighbor stormed into Mulla house and angrily demanded his gold coins back.

Mulla remarked back, “How dare you ask for my gold coins. I know you overheard me when i asked Almighty God for coins.”

Ahmed angrily replied, “But those are my coins. If you will not give me those back yourself then I should sue you in court for justice.”

Mulla pleadingly, “My friend, I am poor man. I don’t have any good clothes or even means to travel. Judge will surely trust you more.”

A resigned neighbor, gave Mulla his jacket and horse too. After that they both went to court.

At court, judge listened to neighbor’s complaint. He turned to Mulla and asked him, “Do you want to say anything?”

Judge asked Mulla if he had any proof.

Mulla replied, “Yes. Well, he assumes that everything i own is his. First gold coins, then jacket and then it’s horse. You can ask him.”

Judge asked neighbor, “Is this true?”

Listening to this neighbor was very upset and angry about what Mulla said and angrily replied, “I am not assuming. All these things are mine.”

Judge then looked at both of them and said, “There is no point to this complaint. You can both leave.”