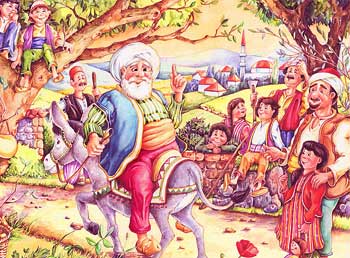 One day several town warriors were gather at a village square and were talking about recent battle. Many people were present there including Nasirudin.

During conversation, one of them boosted, “In midst of battle, i was injured severely and while several knives were still stuck in my arm,  i continued fighting and even in that condition i took out five men..”

Another warrior chimed in saying, “Well, this is nothing.. I had an axe stuck into my right leg and also was injured by several blades in my arms, yet i continued fighting and was able to overcome an ambush of over a dozen men. At end i ended up killing them all..!!”

Just then Nasirudin intruded and said, “Oh.. that’s not much impressive. Back in the day when I was in battle, a ten foot tall warrior sliced my head right off but I picked it up, put it back on my shoulders and kept on fighting as if nothing had happened!”

Once a group of soldiers were gather at village square and were boosting about their accomplishment in battles they fought.

One of them said, “We obliterated them. We were invincible. I myself killed about a dozen of their best men.”

Just then another said, “In battle, i caught an arrow that was headed towards me, threw it back at the shooter and nailed him right in the heart!”

Then third man chimed, “We surely are greatest warriors this town has ever known..”

As they bragged all people listening to them cheered for them.

Just then Nasirudin stood up and proclaimed, “Well, back in my day, when I was in battle, I once took my sword and chopped off my enemy’s arm!”

Just then one of warrior said, “If i were you then i would have cut off his head..”

Nasirudin replied, ” Well, at that time it wouldn’t have been possible..”

“Because someone had already chopped off his head before me..!!”, replied Nasirudin.