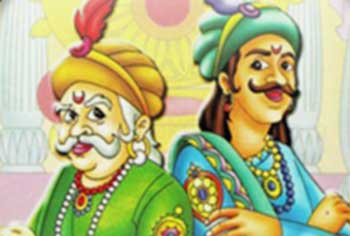 One day Akbar thought about professions and wanted to know which profession was most popular in his capital. He asked about this to his courtier. Some said it would be trade, other said soldiering.

When it was Birbal turn, he arose from his seat and bowed before Akbar and said, “Your Majesty, in my opinion it’s Medicine.”

This was surprising as there was just number of physicians in city. Physicians in court got furious and said, “you have no clue about how difficult is it to practice medicine and advice people about medical problems.

Birbal smiled and said, “I can prove this to you my majesty, If you come with me tomorrow morning.”


Next morning Akbar met Birbal on major crossroad in the city. Birbal had bandage on one hand. Akbar saw it and asked what happened.

Birbal said, “I cut my hand by mistake while cutting some fruits for breakfast.”

Birbal further request Akbar, “Your majesty you will have to write down the names of all the physicians we came across.”

Akbar agreed and said, “I will surely do but firstly be sure to wash that wound and apply ointment on it.”

They sat at busy crossroad through all day. Birbal was a well known personality so anyone who passed by inquired about his injury and advised him some or other medication.

As day went on list grew long, Akbar got tired so suggested to go home.

Birbal asked for list and said, “Majesty you forget to write your own name on the top of list. You were the first to advise me.”

Moral:
It best to refrain telling advice on matters you are not qualified to handle.And for yourself check credential of those who counsel you in both personal and professional life.