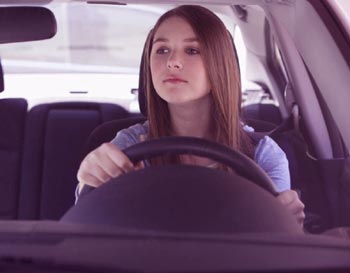 Once a young lady was driving a car along side with her father seated on passenger seat.. Just after few miles they came upon a storm.

Girl asked her father, “What should i do father??”
Father replied, “Keep driving..”

Just after few meters she saw that other cars started to pull aside as storm was getting worse.

Girl got bit scared and again asked hi father, “Should i pull over too??”
Father replied, “No.. Keep driving..”


After few more meter she saw that most of the cars were pulling over.

Seeing this she slow down her car and said to her father, “Father.. I think i should pull over now as i can’t even see clearly ahead because of dust of cloud. Storm a head is terrible and everyone is pulling over..”

As she drove, storm seemed more terrible. It became more and more difficult for her to see and drive forward. She felt like she should stop car and pull over to some safe place but she continued to drive through storm as her father said her to keep driving.

She kept driving even through the storm. Soon see was able to see little more clear and better than before. After few miles she was out of storm on a dry land.

Moral:
Enduring Mental Stress Through Difficult Time in Life is key to Success. During Hard times even Strong people Give up but if You keep Going Forward and Don’t give up.. You will be able to Over come Difficulties and Hard time will be Over.

You May Also Like: Facing Difficulties in Life (Trust in God)

3 thoughts on “Story for Difficult Times – Getting Past Storm..!”