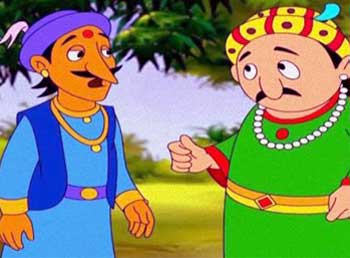 Once Birbal and his friend were going somewhere. In their way they had to pass a small stream, on which there was a old bridge which was so narrow that only one person could pass at a time and with time it had become too slippery.

When they reached there Birbal managed to get across safely but when his friend tried to cross that bridge as soon as he was going to reach other side he lost his balance and fell into water.

Birbal immediately leaned down and stretched out his had toward his friend in order to help him. His friend quickly grasped his hand, then Birbal started to pull his friend toward shore.

Birbal was tightly holding his friend hand and pulling him toward shore. Friend felt thankful toward Birbal and said, “My friend, thank you for saving my life.” and hastily promised him that he would give him big amount of money in return for saving his life.


Birbal stoically replied, “Thank you..!!” and just then let go off his and his friend went back into water with a splash.

His friend was almost on the shore, so with little struggle he was finally on the shore where Birbal was standing.

Friend was shocked at his act and questioned, “Why did you do that?”

Birbal smiled and replied, “To take my reward..”

Friend said, “But.. You could have waited for me to come out of water safely..”

Birbal retorted, “Sure.. But couldn’t you have waited to come out of water and stood on shore..??”

Birbal’s friend realized that he had been hasty in making promise and was wrong in offering offering the reward as friends do not help each other for material gains. He apologized to Birbal and thanked him for saving him and driving good sense into him.

Moral:
We should not make any Promise Hastily.

One thought on “Friend’s Promise..!!”