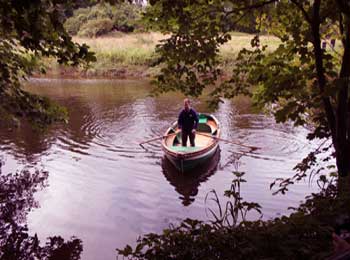 Once a hermit used to live in forest and meditated for years. With his devotion he got powers from God which he could use in the time of need. Hermit was a humble person but after he got power, he became too proud of himself.

After returning from jungle he went to village. One day he had to go a city for some work. There was river in the middle which had to be crossed to go to city. There was boats and boat man available at both sides of river for passing over river.

Hermit reached there and then went near boat man for hiring boat but just then he saw a sage meditating on the river bank under tree on the opposite side of river. Hermit had acquired power and wanted to show off his power to sage sitting there.

Hermit used his power and walked across the river and then went to sage who was sitting on opposite side of bank and proudly said, “Did you see?? I used my power to walk over this river..”


And questioned him, “Can you do this??”

Sage replied, “Yes.. I can but don’t you think you wasted your precious power in crossing river when you could have used same power to help someone in need and do good to others..

Yet you used your power to cross this river which you could have crossed just by paying some money to boatman standing there..”

Hermit realized his mistake and apologized and thanked sage for making him realize his mistake.

Moral:
Being proud is good but when We Look Down on Other then same Pride results in Negative.

If we Acquire any Power we should use it to Help Other rather than Using it to Just Show off.

You May Also Like: Old Lady in Problem..! (What Goes Around, Comes Around)

Keywords : Sage and Hermit Short Story about Power and Responsibility, Never Look Down on Others Moral Lesson Stories for Kids and Students