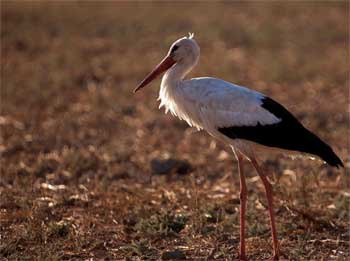 Once in a field, farmer saw that cranes were destroying his newly sown corn. So he planned to catch those birds.

Next evening he set a net in his fields to catch those destructive birds. Next morning when he went to his field to check if his plan worked.

He saw that number of cranes were caught in his net and with it there was a stork.

Seeing farmer stork pleaded to him, “Please release me as i have not eaten any of your corn nor did i destroyed any of your crop. I am innocent. As you may see – am a most dutiful bird. I…..”

Before stork could complete it point, farmer interrupted it and said, “Whatever you said may be true enough but i have caught you with those cranes who were destroying crops and you must suffer with your company..!!”

Moral:
People are judged by Company they keep. 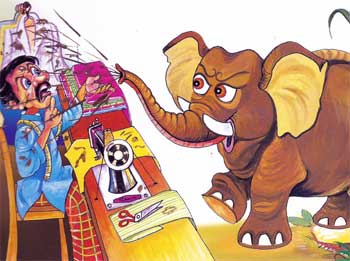 Once in a village an elephant came wandering and started to live there. Elephant would go for bath into a river daily. On his way he would stop at a tailor shop and tailor at that shop would give something to eat to him. They became fast friends.

Days passed by. One day when elephant came, tailor was really mad about fight with a customer. Because of that irritating, as soon as elephant put out his trunk for some food from tailor, instead of giving food to elephant he pricked a needle into elephant’s trunk.

Elephant felt very bad, it went to river and filled its trunk with muddy water and then walked back to tailor’s shop and threw water all over the clothes at tailor’s shop.

Moral:
Never do Wrong to Other..