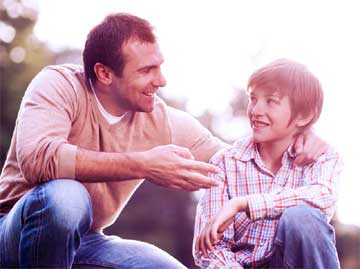 Once in a city lived a very successful businessman. His only son who was still a young boy was lazy and fun loving. His son used to spend money with free hands and never even did any help in any work at home.

Businessman wanted his son to learn about value of labor. So one day he called his son and said, “From today onward you will be given meals at night only if you will bring some earning for that day.”

First boy was confused but when he saw his father’s serious face he knew how serious he was about what he said. Boy got scared and went to his mother. Boy told everything about this to his mother. Mother didn’t wanted her boy to get troubled or skip his night meal. So that day she gave him a gold coin.

At night on dinner table when father asked son about his earning for the day. Boy promptly presented him that gold coin. Seeing that gold coin father understood that he didn’t earn that money.

Father knew that their was no one else who could gave him money. So before going to bed he went to grandfather and told him about condition. Grandfather understood and next day went out so that boy don’t come to him for money.

In morning father again reminded him about condition for meal. Boy went looking for his grand father but couldn’t find him. This time since there was no one to help him, boy was forced to go to market in search of work. After much time one shopkeeper agreed to give him some work.

Shopkeeper told him that he would pay him 10rs if he carried his trunk for him to his home. Boy couldn’t refuse and was drenched in sweat by the time he finished the job. His feet were trembling and his neck and back were aching.

In evening when he returned home he went to his father and gave him those 10rs. Even this time father asked him to throw it in the well. Boy could not imagine throwing his hard earned money like this. So boy refused to throw this money and almost cried.

Son sobbingly said to his father, “Father..!! My entire body is aching. My back has rashes and you are asking me to throw the money into the well.”

Father smiled and said, “One feels the pain only when the fruits of hard labor are wasted. Earlier you got coins without any hard work from your mother and grandfather so you had no pain in throwing coins into the well.”

Son now realized the value of hard work and labor. He understood his mistake and thanked his father for the valuable lesson.

You May Also Like – Facing Challenges in Life.. (Facing n Overcoming Obstacles Helps us  Learn and Grow)