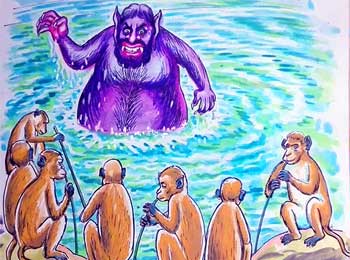 Once upon a time, in deep forest, lived a large group of monkeys. They had a King who big and wise.

King had advised all monkeys, “There are many poisonous fruits in this forest and ponds are possessed by demons. So if any of you see any unusual fruit or unknown pond then don’t eat or drink until you ask me first.”

One day, monkeys came to an unknown pond, even though monkeys were tired and thirsty, no one would drink water from it, without first asking their monkey king. So all monkeys sat on ground around that pond.


When monkey king arrived, he asked, “Did anyone drink water from this pond?”

All monkey replied, “No, we followed your instructions and were waiting for you.”

Monkey king walked along bank, around the pond and examined footprints of animals that had gone into water and saw that none came out again. So, he realized that pond must be possessed by water demon.

He said to all monkeys, “This pond is possessed by water demon, so no one should go into it.”

Monkeys stayed on ground. After a while, water demon saw that none of monkey was trying to go into pond to drink water. So he rose out of middle of pond, taking shape of frightening monster.

He has big blue belly with bulging green eyes. He said, “Why are you just sitting around? Come into pond and drink water.”

Monkey king questioned, “Are you demon who owns this pond?”

Then monkey king asked, “Do you eat whoever goes into water?”

“Yes. I do. When someone come into pond forced by thirst, to drink water, I eat them all, even birds. I will enjoy eating you too.”, said Demon.

Monkey king remained calm and said, “I will not let you eat me or even single one of my followers and yet we will drink all the water we want..!”

Demon said, “Impossible! How will you do that?”

There were large number of bamboos growing around that pond. Monkey king noticed that.

Monkey King replied, “Each of us will drink using bamboo shoots as straws and you will not be able to touch us.”

Bamboo shoots grows in sections, with knots between each and each section is too small, so demon could grab monkey and gobble him up.

Monkey king was no ordinary being. He took a young bamboo shoot, blew through it to make knots disappear and used it to sip water from pond. Then, he waved his hands and all bamboo growing around that pond lost their knots. They became a new kind of Bamboo.

Then all monkeys picked up bamboo shoots and easily drank their fill from the pond. Water demon couldn’t believe his eyes. Grumbling to himself, he slid under the surface.

Moral:
One should be Attentive of his Surroundings.