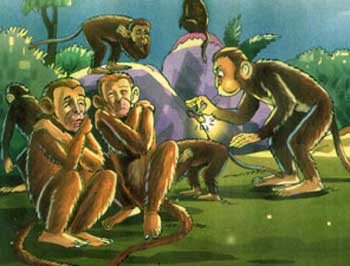 Once a group of monkeys used to live deep in forest. During one winter, monkeys were feeling cold and needed some fire to lessen cold around them.

In meantime, one of those monkey found a firefly which was glowing. It appeared as a ember of fire to him.

Seeing it, that monkey called all other monkeys and said, “See.. I found some fire.. We can get heat from this.”

Other monkeys joined him and started to blow at firefly in hope of getting heat for themselves to keep them warm.


There was a sparrow who was sitting on the tree near by and was noticing all this. Sparrow felt pity for those foolish monkeys.

Considering the vain attempts the monkeys were busy with, it thought of advising them against it, “What big fools you are. You are blowing at some firefly and it can’t help you to give warms. You will never be able to make any fire out of this.”

But monkeys ignored sparrows advice and continued to blow at firefly.

Sparrow kept on seeing all this and yet again felt pity for those monkeys and said, “What you are doing is waste of time. Go and find some shelter nearby cave. You may find a cave or a tunnel where you will be protected from the cold winds.”

Again monkeys ignored it advice. After sometime, sparrow again advised them to leave that firefly.

This time monkeys started to felt irritated and one of them said, “What’s your problem? Why are you interfering in our task?”

Seeing that monkeys wouldn’t listen to her. Sparrow came close to moneys to explain that their efforts were useless.

Monkeys were already frustrated by cold and their efforts to blow that firefly to make some more fire. Sparrow’s continues talks made them more angry.

Soon one of monkeys got so angry that he caught sparrow and smashed it against a stone in anger to shut it up. Sparrow was dead with in minute.

Moral:
It’s Good to Help Others and Give Advice to others but Advising Foolish again and Again can be Harmful for one self. So, Never give advice unless you are asked for it.