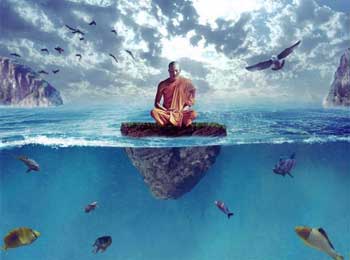 Once a monk used lived in monastery with other monks. One day he decided to meditate alone away from his monastery. There was a lake near by where not many people would visit. He decided to go to that lake to meditate.

When he reached lake, there was no one else. He took a boat out to the middle of lake. When reached in middle, moors it there. There he sat with his eyes closed and began his meditation.

After a few hours of undisturbed silence, he suddenly felt a bump of another boat colliding with his boat. Monk got disturbed but still he kept his eyes closed.


After a while, again he felt bump and by this time, he was ready to scream at the boatman who dared to disturb his meditation.

When he couldn’t control anymore, he opened his eyes and looked toward another boat, to scream but to his surprised, when he opened his eyes, he saw that it was an empty boat that had probably got untethered and floated to the middle of lake.

As soon as monk saw this, at that moment he achieved self realization and understood that anger was with in him and it merely needed the bump of an external object to provoke it out of him.

From then on, whenever monk would come across someone who irritates him or try to provoke him to anger, he would remind himself – Other person is merely an empty boat. The anger is within me.

You May Also Like: Right Way to Live Life – Two Monks Story