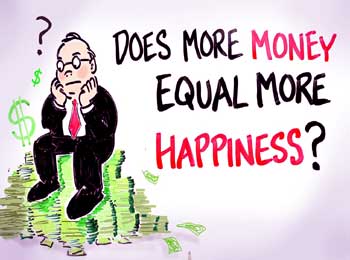 Once a beggar went to a farmer’s house to beg for food. While waiting for alms, beggar saw that when farmer came home, farmer’s wife washed his hands and feet, his children came to him and hugged him.. After this farmer sat down to eat food.

Meanwhile, farmer’s wife came out and gave some bread to beggar. After getting alms, beggar left.

While going on his way, beggar started thinking, “What kind of life do i have.. Walk like a dog all day long and ask for alms. When i reach home, no one is there waiting for me.

That farmer.. what a beautiful house he has. He has a wife, who prepares food for him and children who love him. He is living a happy life..”


Here farmer while eating food said to his wife, “Our bull has become very old, it can not do any work anymore. I need to arrange some money to get work done. I will go to Mahajan’s (a moneylender) house and get some money on loan from him.”

After farmer finished eating, he went to Mahajan’s shop and pleaded for so some on loan. Mahajan agreed. He took out a bag from an iron vault and after counting, gave money to farmer.

After taking money, farmer left for his house.

On his way back to home, farmer started thinking, “I don’t have any money in house. On requesting so much, Mahajan gave me some some. He has hundreds of rupees. How good his life is…”

Mahajan used to own a small shop. He used to bring cloths from big shop from city and sell them in his shop.

Next day, Mahajan went to city to buy clothes. There he bought clothes from shop of Seth (a merchant) in city.

While sitting there, waiting, he saw that many letters came in. Some were from Bombay, some from Calcutta. He got to know that, Seth had made profit of lakhs.

Mahajan kept seeing this. After he left from Seth shop, he started thinking on his way, “What do i own.. Just owning some thousands rupees, i am called Mahajan but look how much this Seth owns.. His profit for just a day is in lakhs. In reality he is happy one..”

On other side, Seth just received a letter showing loss of rs.5 lakh in business.

While Seth was worrying about this loss, just then his servant came and said, “Today, there is a feast at Baron’s (a nobleman) place. You have to go. Motor is ready.”

Seth climbed the motor and went to palace. There he saw that grand arrangements were made. Collectors, commissioners and many wealthy people were present to attend that feast.

So many notable prestigious people were there, that no one would pay attention to Seth.

While returning, Seth thought, “I am also rich but i got scared by loss of 5 lakhs. This is not happy life… He must be living a happy life.”

Now when feast was over, Baron got a headache. When doctor came, he was lying in his room. When doctor inquired, he came to know that Baron was stressed because many letters had come at home about losses he had in business.

Doctor prescribed him medicine and left.

After doctor left, Baron peeped through window and looked down, there he saw a beggar was going. Beggar looked like he was having fun.

Learning:
Happy is only that person who is Content with what he have.

You May Also Like: King and Young Man Story – What is Most Valuable?

Search Keywords: Money Equal Happiness? Reality of Life Interesting Story, Importance of Being Content to Be Happy in Life, Different People Thoughts Story, Who is Happy? Short Story, Learn to be Content With What you Have Story to Motivate One to Live Happily Despite Any Condition, Deep Meaning Story for Adults about Bitter Truth of Life