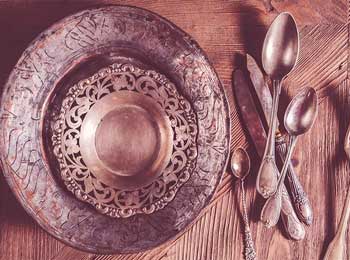 Once in a village lived an old man who was a miser. He was very stingy in use of things.

He had a very expensive silver bowl and it was his most valuable possession. He used to keep it safe, locked in a box. He thought that he would use it only when the right opportunity comes.

One day a saint came to his place. When food was being served to saint, for a moment old man thought that why not serve food to saint in silver bowl.

But the very next moment he thought, “My silver bowl is very valuable. Why should i use it for a poor saint who wanders from village to village..! When a royal person comes to my house, then i will take out this silver bowl.”


Thinking this, he didn’t take out that bowl.

After a few days, King’s minister came to his house for food. Even at that time old man thought to take out that silver bowl but next minute he thought, “He is just a minister in King’s court. When King himself come to my house to have food, then i will take out my precious bowl.”

After few days, King himself came to his house but just before that King lost his war with neighboring kingdom and lost some part of his kingdom.

While serving food, old man thought now i should bring that silver bowl out but then thought, “But King just lost his war. Only a proud person should eat in that bowl. Therefore i shouldn’t take it out.”

After his death, his son kept that box with himself. One day, he opened that box and found a blackened bowl.

He showed that bowl to his wife and asked her, “What should we do with it?”

His wife looked at bowl and said, “How dirty it is.. We should just wash it and use it to feed our pet dog.”

From that day on wards the pet dog of the house started eating in that silver bowl.

The silver bowl which old man had preserved to serve a special person his whole life, was never used for that purpose and finally lost its value.

Learning:
A Thing has Value only when it can be put to Use. Precious things lying idle without Use also have No Value.

You May Also Like: Burning House and It’s Owner – Cause of Sorrow

Search Keywords: Miser Man Silver Bowl – Value of Any Thing, Deep Meaning Stories, Bitter Truth of Life Stories, Simple Yet Interesting Story with Insight about Life, Story to Understand about Use of Things, Value of Thing Depends on It’s Use Short Story