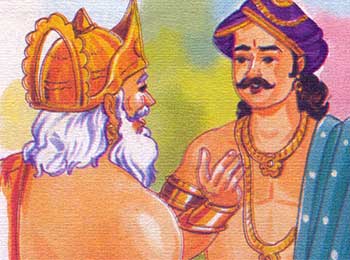 Once King Devraj was not happy with Knowledge of his minister. So, he ordered his soldier to go to his house and give his message. It was occasion of minister’s birthday and everyone was rejoicing when soldier arrived with King’s message.

Soldier said, “Today, in evening minister will be hanged.”

Hearing this, all stopped. Minister’s friends, relatives and other who were present there, became sad and started crying.

But minister continued to enjoy music and dance comfortably. It was as if he had not heard anything. Thinking this, soldiers again announced message of King.


Listening to it, minister said to soldier, “Thank to King on my behalf. For at least i have several hours left for rejoicing before death. He has done a great favor by telling me earlier. Now i can celebrate before my death.”

Saying this minister started dancing again. Seeing this, soldier went back to King.

When soldier reached King’s court and King asked, “What was minister’s reaction after hearing message of his death?”

Soldier replied, “He jumped with joy and asked me to Thank you on his behalf.”

King couldn’t even imagine that anyone could be happy on news of his own death.

King went to minister’s house to know the truth. He saw minister was dancing and singing happily.

King went to minister and asked, “It is your death tonight and still you are laughing and singing.”

Minister first thanked King and then said, “I was never filled with so much joy before. You did a great favor by telling time of death. Celebrating death just got easier.”

On hearing this, King was speechless and realized that his minister is living in present and doesn’t fear death. He said to minister, “If you are not aggrieved by death then it is useless to hang you now.”

Learning:
We are all living in an environment of fear. But if it becomes known that every moment that comes to us will emerge from the present moment, then the state of mind will be completely different.

You May Also Like: Two Rooms – Minister Answer to King