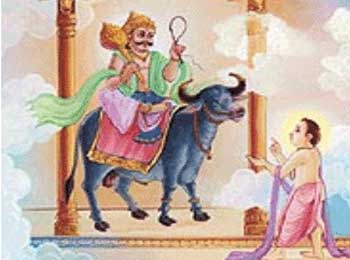 Once upon a time, in a village lived a sculptor who had immense love for sculpting. He devoted his entire life to sculpting and became so proficient in his work that every statue made by him seemed alive.

People who saw his sculptures made by him, used to admire his art and his work was being discussed in distant towns and villages. Soon sense of arrogance was awakened in him. He started considering himself as best sculptor.

As his age began to approach his end time, he began to think of a way to escape from death. He wanted to somehow save himself from the sight of messenger of death.

Eventually he figured out a trick. Using his unmatched art, he created 10 sculpture which looked exactly like him in appearance.


After being built, all statue seemed so alive that there was no difference between sculptures and sculptor.

On day of sculptor’s death, when messenger of death came to take him, he was astonished to see 11 statues and was unable to differentiate between those. Messenger understood that sculptor was hiding among those statues.

Messenger could broke every idol to identify real one but he didn’t want to insult his art. So he thought of a different solution.

He said, “All statues are a wonderful amalgamation of artistry and beauty. But sculptor made a mistake. Had he been in front of me, I would have made him aware of the mistake.”

Listening to this arrogance of sculptor woke up, he couldn’t stay as it is and said, “Error? Impossible! Statues i make are always flawless.”

Messenger trick worked and instantly he grabbed sculptor. He laughed and said,”It’s your time to die. You could have stayed silent. Your statues were perfect. Your trick was good.

Lifeless statues do not speak and you spoke. You got caught because you have no control over your ego. Now come with me.”

Learning:
Ego is cause of Destruction. Therefore, one should never allow his ego to control his actions.

You May Also Like: Saint Teaching and King Realization – Give up Your Ego