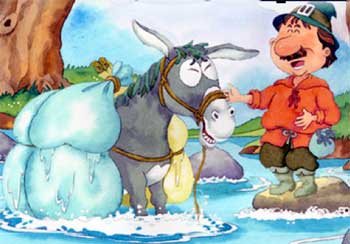 One Morning, a Merchant and his Donkey Loaded with bags of Salt were going to the market in order to Sell them. They were walking together towards the market. Just as they were in middle of their way, they reached a river on the road.

Suddenly the Donkey fell into the river and got all wet. At that time donkey noticed that the load it was carrying became lighter.

There was nothing the merchant could do, Except return home where he Loaded his donkey with more bags of salt. As they reached the slippery riverbank, Now deliberately, the Donkey fell into the River and Wasted all the Bags of Salt on its back Again.

The Merchant quickly Discovered the donkey’s Trick. He then returned home again but Re-loaded his Donkey with bags of Sponges.


As they reached the River, Tricky donkey again Fell into the river but this time Instead of becoming Lighter the load became Heavier.

Merchant laughed at the donkey and said: ” You Foolish donkey your trick have been Discovered. ”

Moral:
Those Who Are Too Clever Sometimes Over Reach Themselves And get Trapped into Their own Trick.

Man and Donkey Stories about Playing Tricks, Donkey Getting Trapped in his Own Trick Moral Stories for Kids