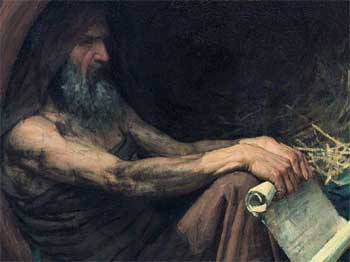 Diogenes was the antisocial, ascetic philosopher who lived in a barrel and rejected all of the norms of civilized behavior.

Those days, people were sold in market as slaves. So few merchant who used to deal in selling slaves, saw Diogenes lying down by side of river.

They were overjoyed to see such good build man. They thought that this man would fetch a good price.

Merchants were only four in number. For them problem was how to catch him because Diogenes had such healthy built that, by looking at him they realized that he was more than enough for those four.


He could easily take on them and kill them.

But merchants didn’t want to lose him as slave. So they decided to hide behind bushes and wait for Diogenes to fell asleep.

Diogenes was listening to all this.

He said, “Don’t be stupid. What do you want? Just tell me. I am not a man to be enslaved but you all look so miserable that i am ready to go with you.”

Merchants couldn’t believe it. They were happy that without any trouble they were able to get him.

Diogenes stood up and said, “Where do we go?”

They told him about slaves market. They walked toward market.

Whole marketplace suddenly turned towards Diogenes. People thought to themselves, “He should be an Emperor.”

Merchants went to auctioneer and told about Diogenes. It was Diogenes turn to be auctioned.

Diogenes walked on to platform, where slaves were auctioned. Standing on platform he looked at crowd and said, “A master is ready to be sold. If slave among-st you wants to purchase as master, he should come forward.”

There was a great silence. Just then one King came up and asked for price.

Diogenes said, “I am a priceless being but you can give whatever you want to, to these poor fellows, these four persons. They have bought me here out of compassion, so you can give them as much as you like.”

King gave the money, took Diogenes in his chariot and rode toward his palace. On way to palace, King talked to Diogenes and realized that he was no ordinary man.

When they reached palace, King said to Diogenes, “You are not meant to be slave, you are master. I free you.”