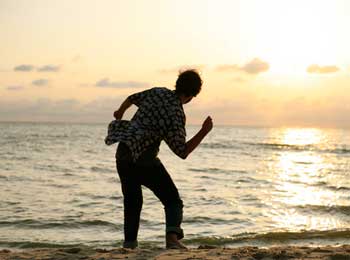 There is story that when the great library of Alexandria was burned, there was only one book left which was not burned. A poor man who could read a little, saw that book and brought it back to his home with him.

On thin strip of vellum of that book was written – Secret of Touchstone.

Man read inside book that – Touchstone was a small pebble that could turn any common metal into pure gold.

In book it was explained that touchstone was on the shores of black sea lying among thousands of other pebbles.


Secret to finding stone was: Touchstone looked like pebble but it would feel warm while all other ordinary pebbles will feel cold.

When poor man read this, he decided to find that touchstone. He sold all his belongings, bought basic supplies and went to black sea and camped on the seashore.

Now, he began testing each pebble.

Man picked up a pebble felt cold and was about to throw i back that when he thought that if keep on testing pebbles and throw them back there, the he might pick up same pebble again hundred of times. So, he decided that whenever he picks a pebbles and it’s cold then he would throw it into the sea.

Man spent a whole day testing pebbles and no even one of them were touchstone. Man picked a pebbles, it cold, throws it into the sea.

Then man spent a week, a month, a year.. three years passed but he didn’t find the Touchstone yet he went on and on this way: He would pick up a pebble, it’s cold, throw it into the sea.. repeating same thing year after year.

But one morning he picked up a pebble and it was Warm.. and he threw it into the sea because he had formed the habit of throwing them into the sea.

Habit made him do it.. even when at last he found the Touchstone he had been looking for, for years.. he threw it away.

Similarly in our Life, Trust is like Touchstone. Very rarely do you find a person who is warm, loving and in whom you can trust but because all out life we kept on meeting people who were cold, we tend to lose even one whom we can trust.

You May Also Like: Three Toys – Trust in Friendship