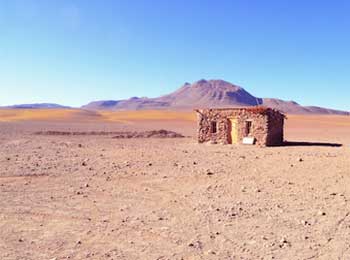 Once a man got lost in desert. Water in his flask had run out two days ago. He knew if soon he doesn’t find water, he will die surely.

Just then man saw a small hut ahead. He thought it may be a hallucination but he had no other option. So, he moved forward in direction of hut.

As he got closer, he realized it was real. He reached hut and when he opened door of hut, he found that it was not occupied and seemed like it had been abandoned for long time.

Man looked here and there, hoping to find water. He was surprised to see that, there was a water pump which had pipe going down through floors, perhaps deep to source of water.


Man began working on hand pump but no water came out. He kept at it but still nothing happened. Finally he gave up from exhaustion and frustration.

He felt like he is going to die. Just then he noticed a bottle in one corner of hut. It was filled with water and corked up.

Quickly he grabbed that bottle and was about to gulp down water, when he noticed a piece of paper attached to it.

“Use this water to start the pump. Don’t forget to fill bottle again when you are done.” was written on paper.

Man got in dilemma that if he follow instructions and hope that it works or ignore that paper and drink that water from bottle.

He thought to himself, “What to do? If i let water go into pump, what assurance do i have that it would work? What if pump malfunctioned?

What if underground reservoir had long dried up? Even if instruction is correct should i risk it?

If it turned out to be false then pouring that water into pump would be throwing away last water, he could ever have.”

He closed his eyes, said his prayers and then with trembling hands, he poured that water into pump and started working the pump.

Little while later, he heard a gurgling sound and then water came gushing out more than he could possibly use.

He drank to his fill, got refreshed, filled his flask and also filled bottle and put cork back.

After feeling much better, he looked around hut. He found a pencil and a map of region. Looking at map he realized that he was still far away nearest village but at least now he knew where he was and which direction to go.

Before leaving the hut, he put bottle at it place back and added his own writing below the instruction: “Believe me, it works.”

Man didn’t know if his Action would be Rewarded but he proceeded Regardless. Without knowing What to Expect, He made a Leap of Faith.

Water in this Story represents the ‘Good things in Life’. Give Life Some ‘Water’ to Work with and It will Return far More than you put In.

Trust in God Stories: King and His Minister’s Believe Story