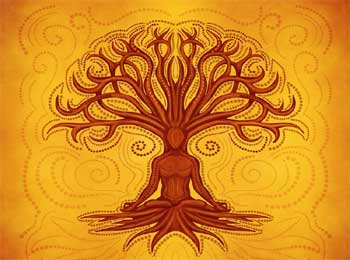 Once in a village, lived a wealthy man who had to go on trip for his work. He started his journey. On his way, he had to pass by a dense forest. When he reached middle of forest, he got very tired by that time, so he sat down under a tree.

While resting, he started feeling thirsty but water he was carrying with him was finished already. He started thinking, “I wish i had some water so that i could quench my thirst..”

Just when he thought of this, a miracle happened and a pot full of water appeared in front of him. He drank that water and quenched his thirst.

After some time he started feeling hungry but he did not had any food with him either.


He said to himself, “How good it would be if I could get delicious food on a plate. My hunger would be gone.” As soon as he spoke, a miracle happened again and a plate decorated with various dishes appeared in front of him. He ate till his stomach was full.

After eating he started falling asleep. He mumbled to himself, “How will I sleep on this rocky ground? I wish there was a soft bed here.” In the blink of an eye, a comfortable bed appeared in front of him.

He lay down on that bed. He began to feel as if he was in heaven, where all his wishes were getting fulfilled one after the other.

He was unaware that the tree under which he was lying was not an ordinary tree but a Kalpavriksha (tree which has the power to fulfill all desires).

Lying on the bed, suddenly a thought came to his mind that the forest must be full of many types of wild animals, what if a lion come and attack him, he will not be able to protect himself.

As soon as this thought came in his mind, from somewhere a dreaded lion came there. Seeing the lion in front of him, he became so frightened that he could not even run away from there. The lion attacked him and killed him.

Learning:
That is why it is said that Man moves with his Thoughts. Positive Thoughts Lead to Positive results. That’s why we should always keep Positive Thinking.


You May Also Like: Result of Positive vs Negative Words – Story for Parents

One thought on “Man Desires – Effect of Thoughts On Life”