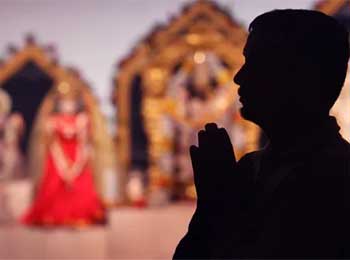 A man used to work at temple and his job was to clean the temple. Priest would give him small amount out of donation made by devotees at temple as pay for his work.

He was very upset with his life because he was very poor and had hard life. While working in temple, he used to complain to God about his life all the time.

One day while looking at the idol he said to God, “How easy is your life? You get to stay there comfortably in one place. Look at me, what a difficult life i am living. I work hard throughout the day just to get food enough to get by. I wish my life was like yours.”

Just then he heard a voice coming from idol, God said, “It is not what you are thinking. My life is not easy at all. I have to look after a lot of things and make many arrangements. It’s not something that anyone can do.”


“What are you saying? Your job is easy. Like you, I too can stand here all day long. What’s the big deal in that?“, replied man.

Voice replied, “You won’t be able to do it. This work requires a lot of patience.”

“I sure can. Just let me live one day of your life.”, man insisted.

God agreed and said, “Okay. today you live my life but i have a condition.”

Man replied, “I am ready to accept every condition.”

God said, “Listen carefully. Many people will come to the temple throughout the day and say a lot to you. Some will say good to you, some will be bad. You have to listen to everyone with patience and still not react to them. Condition is that you can’t say anything. Whatever happen, just stay still.”


Man agreed. For rest of day God and servant exchanged their life. Servant went inside stand at idol’s place and God started working in man’s place and when work was done, God left from there.

After sometime, a rich man came in temple and prayed to God, “I am setting up a new factory. Bless me that this factory runs well and I can make good profit from it.”

After praying, he bowed down and at that moment his wallet fell. When rich man was leaving, servant of temple who was standing in God’s place felt like telling him about wallet but he kept quiet because of condition to keep silent.

Soon after this a poor man came and said to God, “I am very poor. I don’t have money to feed my family and i have to arrange medicine for my ill mother. I can’t understand how i can handle all this. Please God do some miracle and arrange some money.”

When he was about to leave after praying, poor man saw that wallet. He picked up wallet and said, “Thank you God. You heard my prayer so quickly. With this money i can buy food and medicine.”

Man who was in God’s place, saw this and wanted to tell him that wallet belonged to merchant and God has not given it to him, what he is doing is stealing but he was compelled to remain silent.

Just then third person came to temple, who was a sailor and was going on a sea voyage for 15 days. He came to pray to God for safe journey and return.

While he was praying, rich merchant came there with police. Seeing sailor he told police, “He had come to temple after me. Surely he must have stolen my wallet. You arrest him.”

Even when sailor said that he didn’t, police arrested sailor and was taking him away.

Man who became God couldn’t bear this injustice going on in front of him but he couldn’t speak because of condition.

But he felt that it if he keep quiet now, it would be wrong. So, he broke his silence and voice came from God’s idol, “You are taking wrong person away. This wallet was not stolen by sailor but by poor person who came before him. I have seen everything.”

How can one not listen to God! Listening to this, Police released sailor and caught that poor man who had taken wallet.

When God came back to temple in evening, man who was standing at God’s place narrated whole day account with pride saying how he prevented injustice to a person.

Hearing his words, God said, “What have you done? I told you to stand silently as an Idol. By speaking you ruined my whole plan.

That rich man had earned so much money by doing bad deeds. If poor man had got some money out of that, he could have live well and merchant’s sin would also be reduced a bit.

Sailor who went on sea voyage will not be able to come back alive, because a big storm is coming in sea. If he had been arrested and had been in jail for few days, he would have lived at least.”

Hearing this, servant realized that he was only able to see what was in front of him and couldn’t see the reality behind all of that. Where as God considered every aspect of life, makes his plan and runs lives of people.

Moral:
We cannot understand God’s Plan. When something wrong happen to us or something is not happening according to us, we lose our patience and start blaming God.

In difficult times, we need to keep patience by keeping Faith in God. If something is not Happening by your will, it means that it is happening by Will of God.

You May Also Like: Why Do We Offer Food to God? Saint Answer

Search Keywords: Man Complain to God Story – Trust God’s Plan, Interesting Story to Teach us About God Responsibility, God Work is Not Easy Story with Lesson for Life, Must Read Story for Adults Who Complain