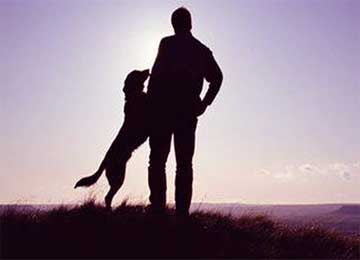 Once a man and his dog were walking along a beautiful road. Just then man realized that he had died and his dog who was there, had been dead for years.

He was happy to see his companion with him. While both were walking forward, man wondered where that road was leading him.

After a while, he saw a big stone wall which was shining and glittering. When he walked along side that big wall, he saw a big magnificent gate which was made of pure gold.

At door he saw a guard. Man was feeling thirsty. So he went to him and said, “Excuse me sir, Where are we?”
Guard replied, “This is Heaven..”


Man got surprised and said,”Wow.. Sir would you happen to have some water??”
Guard replied, “Of course, why don’t you come in..?”

Gate began to open, Man gestured toward his dog and said, “Come in too, my friend..”

Seeing this guard stopped him and said, “Sorry but we don’t allow animals here. If you want to have water, you have to come alone..”

Man thought for a moment and then refused to enter that gate without his dog. He turned back and continued looking for water on his way with his dog.

After long walk, at top of hill, he saw farm fence. He continued walking and soon reached an entrance with a gate which was open.

There he saw an old man leaned against tree, reading a book…

Man went to him and said, “Excuse me sir, do you have any water?”
Old man replied, “Sure, why don’t you come in?”

Man questioned, “Sir, can i bring my friend along?”
Old man replied, “Sure..”

They went through gate and there old man gave them water. Man filled a bowl and gave it to his dog first and then had some himself. After their thirst was quenched.

Man asked old man, “What is this place?”
Old man replied, “This is Heaven..”

Man got confused and said, “But on way here I saw a fancy place and it’s guard told me, that was Heaven too..”
Old man smiled and replied, “Oh that place with golden gate.. It’s Hell..”

“But isn’t it wrong that they use your place name??”, Man questioned.

Old man replied, “It’s fine.. We are just happy that they screen out people who would leave their friend behind…”

One thought on “Man and Dog Friendship..!”