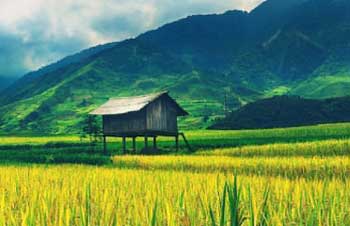 It’s story of Rich man who had four sons. As rich man grew old he decided to give his property to son who would value his wealth most.

So, he called his sons and gave each of them five Grains of rice and told them that he would ask for these grains at the end of 5 years. At last he said that he will give all his property to son who will value these grains most.

First son threw away the grains and decided to show some other grains when father would ask for them. He thought that hos father will not be able to guess difference between set of grains.

Second son eat them and like the first son thought of showing other grains when father demands.


Third son kept grains in silver box at home and offers prayer to box while praying to God.

Fourth son went to his home and sow those grains in his backyard. He cultivate them in backyard and After they grow  harvested them. He kept on re sowing the grains from this crop and in 5 yeas time period he had a vast plot of land cultivated with rice.

After 5 years when all the son reached home. Father gave his property to fourth son as he was the one who valued those grain most.

Moral:
Making most of every opportunity. We should take the very little opportunity work hard and let it grow.

Search Keywords: Making Most of Opportunities – Rich Man and His Four Son Story, Educational and Motivational Management Stories for Students