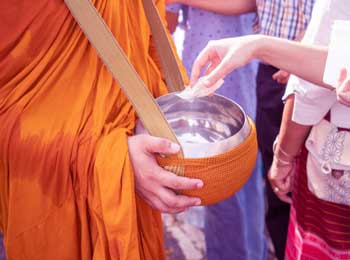 Once a saint was going home to home asking for alms. He knocked on a door and called out, “Bhiksham Dehi (Give me alms).”

A little girl came out of house and sadly said, “Baba, we are poor, we have nothing to give you.”

Saint smiled and said, “Do not refuse daughter. If you don’t have anything else, you can give me some mud from your house courtyard.”

Girl picked up a handful of mud and put it in saint’s alms-pot.


There was a disciple who was accompanying saint. He saw all this and asked saint, “Guru ji, We could have go to another house for alms. Why did you ask her to give you mud in alms?”

Saint replied, “Son, if she had said no today, she would never have been able to give again. Today, you know what happened when when she gave mud? She will learn to give.

Today, mud has been given, if spirit of giving has awakened in her. If it becomes strong, she will give fruits and flowers in future.”

Learning:
Always get the Donation done from the Hands of the Small children of your Family, so that the Spirit of Giving is Inculcated in them since Childhood.