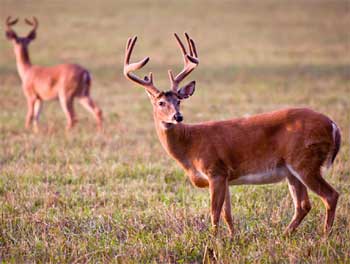 Once upon a time, lived a deer who was leader of thousand deer. He had two sons. One was slim and tall, with bright eyes and was called White. Another one was blackish in color and was named Black.

After both sons were fully grown, their father called them.

He said, “I am very old now, so i can’t do all the necessary things to look after and take care of this big herd. I want you two to be leader instead of me, while i retire.”


During harvest time rice is at it’s tallest and deer can’t help but go into paddies and eat it. To avoid destruction of their crops, farmers would dig pits and set sharp stakes in ground, build stone traps to capture and kill deer. Because of this when the harvest time comes, deer were always in danger.

Knowing this, wise old deer called his two sons, who were chosen leaders. He advised them to take herds up into mountains, far from farm lands and then bring them back to low lands when harvest season is over. As this was only way he had saved his herd from being killed during harvest season.

Wise old deer was too weak to take trip, so he remained there in hiding. He warned them to be careful on way and have safe journey.

Both new leaders set out with their herd for mountains.

White was wise enough to keep his father’s advice in mind and understood dangers of moving his herd. So he was very careful. He knew it was safer to stay away from villages. He knew i wouldn’t be safe to travel in day time. So he led his herd wide around the villages and moved only in middle of night. His herd reached mountain safe and sound.

But Black didn’t pay attention to his father’s advice and in hurry to reach mountain. He didn’t even care about day or night and continued going with herd from villages and farm area. Because of this many were killed and wounded by villagers. Black reached forest with only few deer alive.

Two herd stayed there until harvest season was over.

White led his herd back carefully as before and brought all 500 deer back safe and sound while Black herd was almost killed and some were lost during return.

Seeing this Old wise deer said, “White has all his followers with him while Black is coming back wounded with more than half his herd dead. Therefore who follow a wise leader with good qualities and will always be safe. Those who follow a foolish leader and is careless and think only of himself, will fall into troubles and be destroyed.”

After this White became chief of herd and was loved and admired by all.

Moral:
One who Learns from Old and take their Advice serious will Lead a Safe and Better Life.