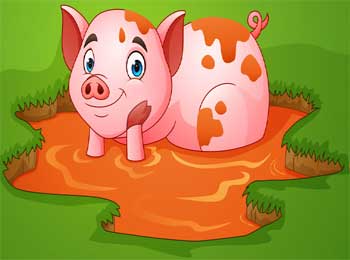 Once lived a lion in a forest who was young, strong and owner of beautiful body. There was no one in forest equal in strength to him. All animals in forest respected him.

One day, weather was hot. Lion went out in search of prey, he became troubled by heat. Cool air was blowing near a muddy place, so lion stood near it because coolness there gave him relief from heat.

A pig was lying in near by bushes. Seeing lion, he came out and started calling him bad things. Hearing that lion was filled with anger and challenged him saying, “There is no one in this forest as strong as me. If you have courage, then fight me with strength.”

Pig jumped into muddy place and was now covered in mud and smelled really bad.


Seeing him like this, lion thought, “My body is so clean and beautiful and if i fight with pig, i will also be covered in mud. What will i get by fighting this rude pig? It itself is dirty and I will also become dirty by getting entangled with it.”

Thinking this, lion abandoned the idea of competing with the pig and left.

Learning:
A Wicked person is like a Pig covered in Mud. They Hurt others with Uncivilized words and Provoke them to React. Once, you react, keep your Feet in the Mud, you will not be able to Escape from it Splashes and you will also get Covered in the Mud.

This story describes How to Handle Provocation from such Wicked People.

If you want to Preserve your Honor, then Do not get Involved in the Nonsense of Wicked people. There is No use in Dealing with such a person. That person just has No Respect, what difference will it make to him? But by getting involved with such person, your prestige among the society and the people will definitely be reduced.

So Don’t be Foolish to indulge in the Nonsense of Wicked people. Answer them with your Silence.

You May Also Like: Who is Real Mother? Interesting Story

2 thoughts on “Pig’s Provocation! Way to Deal with Wicked Person”