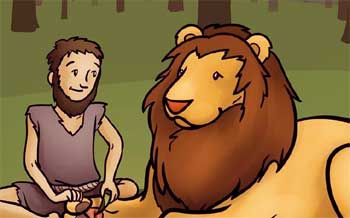 Once in a village lived a rich man. He had many slaves and helpers for work. Slaves used to work very hard for master but still master was never happy with their work. Master was very unkind and cruel to them.

One day one of the slave made mistake while cooking food and food got over cooked. When master saw the food he became angry and punished slave. He kept him in a small room and locked it from outside. Somehow slave escaped from that room and ran away.

He went to forest. There he saw a Lion. Instead of getting afraid of lion and run away he went close to lion and saw that lion was injured and one of his leg was bleeding. Slave searched for herbs to cure his wound. Slave took care of lion. After few days lion recovered. Slave and lion became very close friends.

Few days went by but one day servant was caught by master’s guard. Guard took him to master. Slave’s master decided to punish him severely. He asked guards to put him in lion’s cage. Whole village got news about it and came to see.


On the decided day master pushed slave in front of hungry lion. As soon as slave was locked in lion’s cage. Lion came near him and started licking his hand and hugged him. It was the same lion whom slave had helped in forest. Seeing this everyone was surprised. Master thought that slave was a great person that’s why lion didn’t killed him. Master freed slave and made him his friend and started to treat all his servants and slave better.

Moral:
We should try to Help others in their Ti

me of Need and Never be Afraid to Help because sometimes Helping others is like Helping yourself.

You May Also Like: Lion and Camel Story (Always be on Guard)

One thought on “Lion and Slave Story!!”