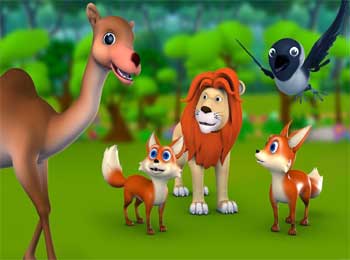 Once in jungle, lived a lion with his three assistant – crow, jackal and leopard. They regularly roamed around jungle together. One day, they saw a camel in jungle. They were surprised to see a camel there. So lion went to him and ask about it.

Camel told him that he was separated from his caravan and was lost. Lion felt pity for him and asked him to come live with them and assured him of all the safety.

Camel agreed and all started to live together.

Sometime elapsed and one day, while hunting lion got wounded in a battle with an elephant. He became too weak to even kill a small prey. Because of this assistants also suffered from shortage of food as they were always dependent on lions hunt and leftover to fill their stomach.


Lion’s assistant gathered and decided that they should kill camel as it would provide them with lots of food and with that they can survive even without hunt for some days.

So, they went to Lion and suggested that he should kill camel for meat.

But Lion refused as he didn’t wanted to kill animal to him he assured security. At this assistant said that if they convince camel to offer himself as food then lion shouldn’t have any problem in killing him.

Lion agreed to this.

Assistants made a plan. When all were gathered. Crow, jackal and leopard offered themselves to lion as meal, one by one. They said that it was their duty to ensure that King of jungle doesn’t die because of hunger.

But lion refused every time.

Seeing this, camel also came forward and offered himself as meal to Lion.

No sooner had he made the offer, influenced by his assistants, lion jumped on camel and killed him and then camel was eaten by all animals together.

Moral:
It is Unwise to Trust Cunning people who surround Powerful or Wealthy ones, for their own Benefit.