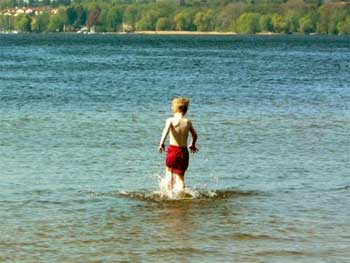 It was hot and dry summer. The beach was crowded with the people as they gather to beat the heat. There were so many people, from kids to aged people, enjoying the ambiance at the beach. There was a group of 20 boys aged between 12 to 15 years trying to be adventurous. They intend to hire a yacht, but due to tides, the yacht rides were prohibited on that day. Still, the boys were enjoying the most in the sea.

Suddenly the boys challenged themselves about racing in the sea. The one who swims and moves farther in the sea win the race and deserves a huge treat from the group. The boys agreed, except a few. A boy in the group warned them not to play with danger, as the waves weren’t constant, they fluctuate. Some didn’t hear their warnings and started their race.

Suddenly, the waves from the sea elevated and few boys in that young group struggled to manage themselves to reach the shore. However, three boys, who considered themselves very brave decided to move deep into the sea for more thrill and fun! They determined to beat the tide and swim further.

While many people warned them, they continued to swim, far beyond the shore. All of a sudden, one boy was missing from the group. Away from the group the boy was unable to cope with the rising tides and the other two shouted for help.


No one dared to help the boys as the tides were so alarming. The crowd in the shore moved back to safe place.

From the crowd at the beach, one brave man consoled those two boys. Then he rushed to rescue the little boy who was swept out to the sea. Fortunately, he saved the boy’s life with so much effort. He brought him back to the sea shore after so many struggles. At first the boy was unconscious. Then after the first aid, he became conscious and opened his eyes. He saw the man who saved him from drowning in the sea. The boy said, ‘Thank you so much uncle, for saving my life. I’m so grateful to you. Thanks a lot.’

The man stood silently for few seconds and told him, looking deeply into his eyes, ‘Good on you child! You got a savior and your life is now renewed. You are born again. Make sure that your life is worth saving!’
The boy understood the man’s words.

Moral:
Let us live a life that really worth something!

You May Also Like: Ability to Change (Perspective for Life)

Search Keywords: Boys Racing in the Sea – Short Stories About Change In oneself, Moral Stories to Inspire Kids Live Life Worth Living