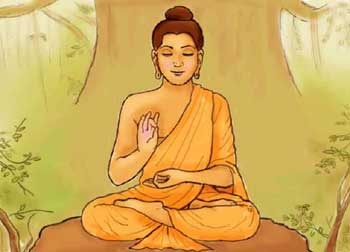 Once a man who was a well known criminal, sinner. One day he decided to go meet Buddha. He wanted to be initiated and wanted Buddha’s help but he was afraid people might not allow him to enter at his place.

So, he decided to go at such time when there were not too many people. Instead of entering from main gate, he jumped from a wall of back side.

By chance, Buddha was gone for begging at that time. Man was caught by Buddha’s disciple.

Man said, “I have not come to steal or anything. I am well known around here, hated and feared by most around here. I was just afraid that you wouldn’t allow me through main gate that’s why i came from back. You might not believe but i want to become sanyasi that’s why i came here.”


So disciples who caught him, took him to disciple name Sariputra, who was great astrologer and who had capacity to read people’s past lives.

Disciples asked Sariputra, “Please, look into this man’s past lives. In this life he is a murderer, a sinner but may be he earned some fortune in his past lives and that’s why now he wants to become sanyasi.”

Sariputra looked into his past thousands lives but he was always same. Even Sariputra started trembling and said, “He is so dangerous. For thousands life, he always a sinner. It is impossible – any change in this man is impossible. Even Buddha can’t do anything.”

Saying this Sariputra asked disciples to take him out immediately.

So that man was turned out. He felt hurt and thought that there is no chance for him to change. Alive, he couldn’t be around Buddha, thinking this, he wanted to commit suicide.

So, Just around main gate corner, he started to hit his head against stone wall to kill himself. Just then Buddha was returning from begging. Seeing man, he stopped him and took him inside.

After few days, man was initiated and became a disciple of Buddha.

Now, everybody was confused. Sariputra went to Buddha and said, “This man has lived thousand lives of misery and has been a sinner. How can this man become initiated in some days? If this man can be enlightened in some day than what is point of looking into people’s past lives?”

Buddha replied, “You looked into his past but didn’t look into his future. Any moment person decides to change, he can change – the very decision is decisive..

This man has lived thousand lives of miseries but now he hankers to change and his intensity to change is infinite.. Hence in some days, he was able to initiate.”

You May Also Like: Zen Master Test for Boys..!