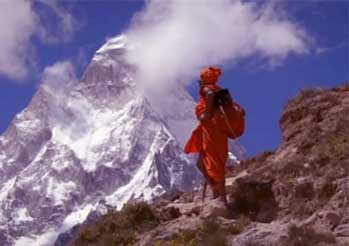 Once a saint who was on his death bed called his disciple and said, “Remember one thing.. Never Allow a Cat in Your Life..”

Just after saying that saint died. Disciple was perplexed by those last words. He was not able to understand it’s meaning. He thought to himself, “Why would i allow a cat in my life?? What does this meant?? How will i know it’s meaning..”

There was a old wise man who used to follow that saint. One day he met his disciple and got into discussion.

Once a young man renounced from his life of worldly pleasure and came to mountains to live a secluded life as a saint. He would roam around looking for food and water for his basic need.

There was a village near by and soon people learned about that saint. Saint was respected by villagers and soon they built him a small hut. Saint started to live in that hut.

Saint had only 2 cloths and nothing else. Soon trouble arise for him as some rat came into hut and started to chew away on those two clothes.

In meantime, one of villagers got to know about this trouble. He bought a cat with him and said, “You are troubled by rats and if you keep this cat here then you wouldn’t have to worry about rats anymore..”

Saint accepted it and continued with his routine. Saint was no longer troubled by rats but now his problem was that he needed milk or food to feed his cat.

Now, saint had to go to village to get milk for cat. After few days, villagers thought that it would lot of trouble for saint to come to village daily for milk to feed his cat.

So they collected fund and bought him a cow. It was solution for cat’s milk but now saint had to go to village and beg for grass for his cow..

Villagers said it’s not right and thought that if we look for someone who can look after things for saint then it won’t be so troublesome for him.

There was a widow in village, villagers persuaded her to help and serve saint.. After much persuasion she agreed and started to take care of chores for saint..

With time young saint and widow grew fond of each other and love started to bloom between them. Before saint could even realized he was married to that lady and had children.

And then he thought to himself, “My god, that’s what I had left behind! I have renounced the world — this is the whole world again! It grew so slowly that I was not aware until the children came.”

Old man said, “Just because of that cat whole world came in..!! That’s why he told you not to allow a cat in your life.. He was talking about his own life story..”

As such no activity of life should be seen as a distraction for living a spiritual life. Every activity of life can be done with Mindfulness or with a Detached attitude but this is true for Highly Evolved Soul.

For most people who are Still on the Path, they should not let Distractions them divert from Spiritual Path and Focus Intensely in our Spiritual Practice so that they become more Centered Inside.

You May Also Like: Young Man Search for Perfect Master..!

One thought on “Spiritual Growth Moral Story – Distractions in Path..!!”