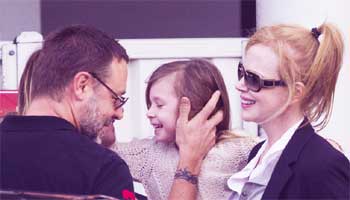 Story of man who experienced a life changing event at airport while he was waiting there to pick up his friend. As the man was trying to locate his friends at airport, He noticed a man coming toward him carrying his bags and stopped right next to him.

After reaching his family he first motioned to his younger son (6yrs old) and they gave each other a long and loving hug. As the separated father said to his son, “It’s so good to see you son. I missed you so much.” His son replied softly, “Me too Dad.”

Now the man stoop up to his elder son (10yrs old) and holding his son’s face in his hands with love he said, “I love you so much Zach.” And the too hugged lovingly.

While all this was happening, Man saw a baby girl (1yr old) excitedly in her mother’s arm, never taking eyes off his returning father. While the man gently took his baby girl from his wife he said ,”Hi baby girl.” And kissed her all over and held her close to his chest. The little girl instantly got relaxed and laid on her father’s shoulder.


After having some moments with his daughter, he handed little girl to the oldest son and said, “I have saved best for last.” and proceeded to give his wife most passionate kiss and silently said, “I Love You So Much..!!” While holding each others hand they gave each other big smiles.

For an instant it seemed liked they were like newly married couple but looking at their children Man knew that it couldn’t be possible.

Man waiting for his friend suddenly felt uncomfortable but couldn’t resist himself from asking, “Wow! How long you two have been married?”
He replied, “Been together for 14 years and married for 12 of those.”

Now, out of curiosity man asked, “How long you have been away?”
“Two whole days!”, Man replied still beaming with his joyous smile.

Man was stunned to her “Two days!!” as Looking at the intensity of greeting. He already assumed that person had been gone for weeks at least if not months.
Amazed by the love and affection of couple even after so many years man mumbled to himself, “I hope my marriage is still that passionate after 12 years.”

The man who just met his family suddenly stopped smiling and look into eyes of man and told him something. He said, “Don’t hope my Friend… Decide.” and shook hands with him saying, “God Bless!”