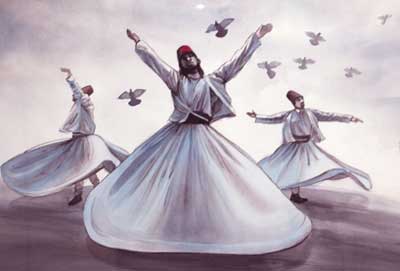 Once there was a great Sufi saint. In his last days, someone asked him about his master.

Saint said, “I had thousands and thousands of masters and if i even try to tell you about each of them, it will take months or years and it is too late for that. But since you asked i will certainly tell you about three master..”

# Among three of them One master was a Thief.

Once while wandering around in a desert i got lost and till i found a way and reached village it was too late. Everything was closed and there was no one outside.


At last i found a man who was trying to make hole in a wall. I went to ward him asked him if i could find a place to stay. He replied to that it will be difficult to find a place to stay at this time of night but you cans tay with me, if its ok with you to stay with a thief. I stayed with him for a month.

Each night he would say me that, “I am going to work. You can rest and pray.”
When he came back i would ask him, “Did you get anything today?”
He would reply, “No not tonight but tomorrow i will try again. God Willing.”

Even after daily disappointment he never lost hope and he was always happy.

When i was meditating for years and still nothing changed, many moments came where i would get so desperate and hopeless that i thought of leaving all this and then suddenly i would remember words of that thief that, “God willing, Tomorrow it is going to happen. ”

# Second master was a Dog

Once i was going along side of a river, there i saw a dog who was very thirsty. I saw that as dog looked into river to drink water, it saw his own image and got afraid. Seeing his own reflection dog barked and ran away. But because dog was too thirsty he would come back. This happened many time but finally despite his fear, dog jumped into water.

Seeing this i knew that it was a message from God. It means that one has to go forward despite all of his fears.

As i entered a town i saw a little kid carrying a lit candle in his hands.

I asked him, “Have you lit this candle yourself? ”
He replied, “Yes sir.”
I said, “There was time when candle was not lit and when it was lit but can you show me the source from which light came?”
Boy laughed and blew out the candle and said ,”You have seen light go? can you tell me where it had gone?? ”
Boy continued, “Ok, i will tell you it had gone to the same place where it emerged. It had returned to the source.”

This shattered my ego and at that moment i felt how stupid i was. And since then i just dropped all my Knowledge-ability.

I had no master but this doesn’t means that i was not a disciple. I accepted this whole universe, whole existence as my master.

Moral:
In this world there are millions of source and you can Learn from Every Possible Source. With a Master you start Learning to learn.