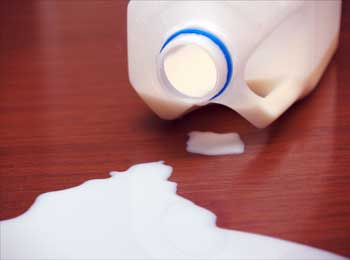 Once a famous scientist was interviewed by a reporter.

Reported asked him,”What do you think you set you apart from others?”

He replied, “I think it all came from an experience that occured in my childhood.

When i was 3 years old, i was trying to get a bottle of milk from refrigerator and while doing so i lost my grip and bottle slipped out of my hands and fell, spilling all the milk over the kitchen floor.


When my mother came to kitchen and saw all mess, instead of yelling at me or giving me lecture or punishing me…

She said, ‘Robby, i have rarely seen such hugh puddle of milk.. Well, damage has already been done, would you like to get down and play in milk for few minutes before we clean it up..?’

And indeed, i did started playing in that milk.

While i was playing in milk, after a few minutes my mother came back and said, “You know, whenever you make a mess like this eventually you have to clean it up and restore everything back to its proper order.”

Then she asked, ‘How would you like to do it? We can use a sponge or a towel or a mop to clean this up. Which do you prefer?’

I chose sponge and then i cleaned that up that spilled milk with my mother’s help.

My mother then said, ‘You know what we have here is a failed experiment in how to effectively carry a big bottle with two hands.

Now let’s go out in back yard and fill same size bottle with water and see if you can discover way to carry it without dropping it.’

That way i learned that if i grasp bottle at near tip with both hands then i could carry it without dropping it.”

At end of interview scientist remarked that, “It was at that moment i knew that i don’t need to be afraid to make mistakes. Instead I learned that mistakes were just opportunities for learning something new and that’s what scientific experiments are all about.. Even if an experiment doesn’t work, we usually learn something valuable from it.”

Moral:
Make Mistakes and Learn from them but Never Repeat Mistakes..

You May Also Like: Thomas Alva Edison Childhood Inspirational Story..!